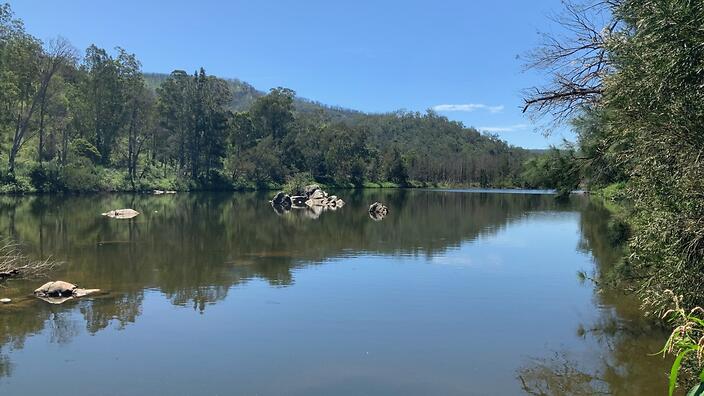 A leading archaeologist has described the cultural heritage assessment for a proposal to raise Sydney’s Warragamba Dam wall as lacking, and has called for a second peer-reviewed study.

The wall of Sydney's largest reservoir will be raised by as much as 17 metres under the controversial, billion-dollar project, intended to reduce flooding risk in the Hawkesbury-Nepean valley.

“This is obviously a traditional owner that felt left out of the process. And very much confused by a very large, weighty report that had been put on her table with minimal time to review it. All that in mind, we decided that we would do a pro bono review of the report and provide her with some expert advice on where to go forward with perhaps what she wanted to do.”

Their review, submitted to a NSW parliamentary inquiry looking into the government’s wall-raising proposal, found the Cultural Heritage Assessment lacking.

Dr Slack described the assessment as “quite old fashioned”, in that it looked solely at the heritage value of the physical environment, and didn’t consider the more social aspects of cultural significance.

“The report did nothing in terms of understanding the traditional stories of the area and the importance to (traditional owners) with ongoing connections to their heritage as well,” he said.

“This is the only cultural heritage report for such an important project.

“On the basis of this (report's) advice, you would have the inundation of hundreds, if not thousands of potential sites, and a completely modified landscape that's gone forever. You can't put cultural heritage back once it's gone.”

“The potential impact is catastrophic.”

His review called for a second peer-reviewed survey with greater consultation with different registered Aboriginal parties, including Ms Brown.

“Our short review suggested that they should probably go back to the start again and do further consultation, face to face meetings and spend some time sitting down with people to actually hear the concerns and hear about stories about country much more, and really embed the social layer of that landscape into what they've done,” he said.

“But also go back and look at the wider landscape, a better survey on the ground, and one that also considers the Blue Mountains World Heritage Area, which is right next door.”

In a statement, WaterNSW said it was undertaking Aboriginal cultural heritage consultation and assessment as part of its Environmental Impact Study for the proposal.

It said an updated draft Aboriginal Cultural Heritage Report, incorporating additional detail, would be reviewed by the Registered Aboriginal Parties and their comments incorporated in the final document.

“All stakeholders and interested parties will have the opportunity to review and comment on the completed EIS during public exhibition,” the WaterNSW statement said.