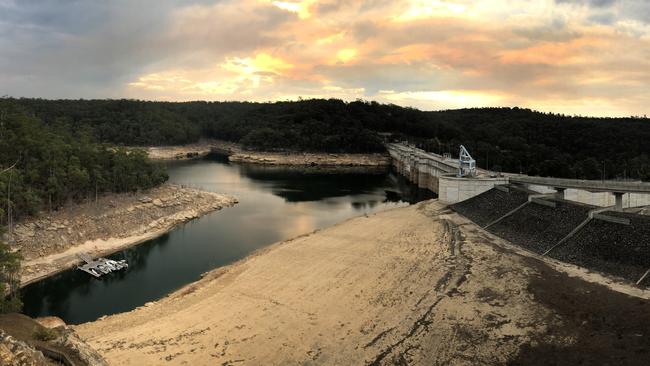 Raising the Warragamba Dam wall in Sydney’s west could threaten at least 330 sensitive Aboriginal sites discovered so far, according to a confidential Heritage NSW memo which describes environmental planning conducted by WaterNSW as “inadequate”.

A ministerial briefing obtained by The Australian identifies an array of concerns with the Aboriginal Cultural Heritage assessment conducted by the government-owned organisation, which has been tasked with producing an environmental impact statement into the project.

The Berejiklian government proposes to raise the dam wall by about 17m to provide flood mitigation for at-risk communities within the Hawkesbury-Nepean valley. It says doing so will reduce the risk to “life, property and community assets”, as well as increase the amount of time communities are given to evacuate their homes in the event of a disaster.

The project has been criticised by traditional landowners and some environmental agencies, among others, for the harm it stands to cause to sites of cultural value and natural habitats within the area surrounding the dam.

The National Parks Association of NSW told a parliamentary inquiry last year that the project would “result in the periodic inundation of extensive areas” of World Heritage-listed reserves around the Greater Blue Mountains national parks.

The ministerial briefing, compiled by Heritage NSW, cites a range of further shortfalls in respect of culturally significant sites.

Despite these concerns being raised repeatedly with WaterNSW since 2018, they have “not been addressed in a proactive manner”, the memo notes.

“The EIS has identified at least 330 Aboriginal sites with an acknowledgment that only approximately 27 per cent of the potential impacted area has been surveyed,” the document states.

“Heritage NSW has provided clear and consistent advice regarding the inadequacies of this Aboriginal cultural assessment.”

Listing several “high-level issues”, the briefing pans “inadequate consultation” with the Aboriginal community, along with a failure to account for clear opposition to the project, and further inadequacies with assessments of “tangible and intangible” cultural values of the site.

In July 2018, Heritage NSW received an Aboriginal Place nomination for an area that included Warragamba Dam and which was described by the department as providing “clear and articulate reasoning for the significance of this place”. It cited the area as having a connection to a Dreamtime creation story known as “The Journey of Gurangatch and Mirrigan”, first published in a German journal in 1908. “Initial HNSW assessment and consultation indicates this large site is highly significant to the people of NSW,” the briefing states.

In its further criticism of ­WaterNSW, the briefing also notes a need for “clear modelling” surrounding water inundation levels and their impact on heritage sites, as well as the loss of a “significant opportunity” to “positively impact” the local community with “mitigation measures”.

A spokesman for WaterNSW said the environmental impact assessment had been in draft form and work was continuing with regard to cultural heritage consultation and assessment.

“An updated draft Aboriginal Cultural Heritage Report, incorporating additional detail, will be reviewed by the Registered Aboriginal Parties and their comments incorporated in the final document,” the spokesman said.

Heritage NSW recommended a new anthropological report and further archaeological assessment of specific sites and the potential impact of flooding.

WaterNSW in August ruled these recommendations were “outside of the scope” of the project and provided “no indication” on whether it would be adopted, the ministerial briefing notes.

WaterNSW is understood to have revised its position and engaged an independent anthropologist in recent weeks.