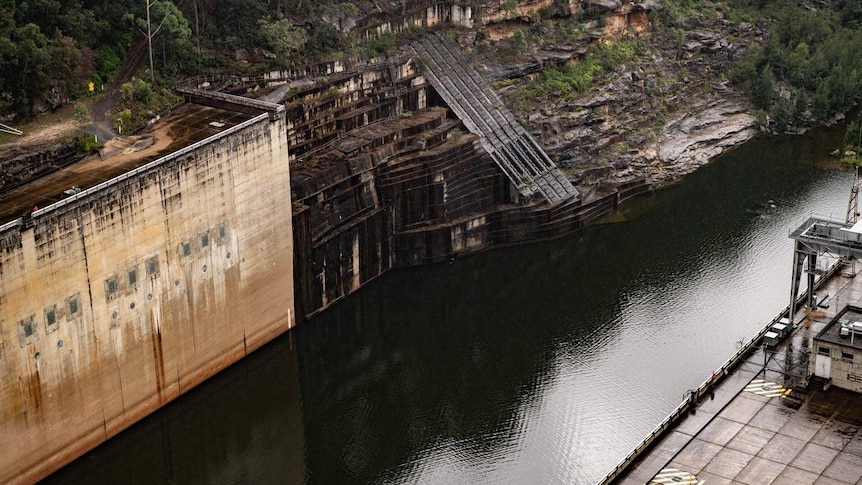 The New South Wales government tried to avoid paying nearly $3 billion in compensation for environmental damage expected to occur as part of its plan to raise the Warragamba Dam wall and flood large parts of the Blue Mountains World Heritage Area.

The move is among a series of revelations contained in leaked documents seen by the ABC, which experts believe bring into question the government's handling of the project.

The revelations come as parts of western Sydney are caught in the middle of a "one-in-100-year" flooding event, with the Warragamba Dam — which overflowed on the weekend — spilling a Sydney Harbour's worth of water each day into the already swollen Sydney basin.

The NSW government wants to raise the height of the wall by at least 14 metres to reduce the future impact of floods in the Hawkesbury Nepean Valley below, one of the areas hit the hardest hit by this week's flooding.

As seen over the past few days, the burgeoning outskirts of Sydney have one of the highest flood risks in the country, according to the State Emergency Service.

In one of the documents accessed by the ABC, the move to avoid paying $2.88 billion in "offset" costs if the wall is raised went against the advice of the government's own expert ecologists who warned it was not allowed.

Other leaked documents show the government fought with its lead ecologist over the environmental impact statement (EIS) she was writing, urging her to downplay the impacts of the project.

Eventually, the ecologist quit and was replaced by someone who, until that week, was employed by the government on the dam-raising project.

Experts believe that move has created a conflict of interest and the handling of the project has set the stage "for a major ecological disaster to the ancient ecology of the Blue Mountains".

The government denies any governance issues and insists the project will save lives.

Flooding the Blue Mountains to save Sydney's west

Floods in the region can be much worse than this week's events. In the past they have reached as high as 20 metres above the normal river level — a height that today would inundate about 12,000 homes.

The highest flood considered possible would add more than another 6 metres on top of that, and with the population in the floodplain set to double in the next 30 years emergency services say it is a problem that needs urgent attention.

The government said the additional height of the dam would not be used for water storage but would be kept empty to hold back inevitable floods.

That water would then be released slowly, reducing the height of the flood downstream.

When that happens, some of the floodwaters that would otherwise hit western Sydney would instead flood parts of the Blue Mountains World Heritage Area, damaging unique ecosystems and Aboriginal heritage.

"We've got to ask ourselves, what's the small price we pay ... on the environmental side to be able to stop paying a very, very high price when the flood arrives and we potentially lose people's lives," he said.

The EIS — which details projected environmental impacts upstream — was planned for release more than two years ago, but it has still not been completed.

Mr Ayres blamed the delay on the size of the area affected by the project, the 2019/20 bushfires, and interference by environmentalists.

"There's no doubt it's a very complex document, it's taken longer than what I anticipated," he said.

But the ABC has obtained leaked sections of two recent drafts — as well as a cache of other leaked emails and comment sheets — and FOI documents revealing a striking level of expected damage, estimations of the associated compensation payments required, and the inner workings of the government's response.

One draft EIS, from September 2019, shows the ecologist hired by the government concluded extensive damage would be caused by the project.

The ecologist found the project would likely impact:

By Michael Slezak and Penny Timms