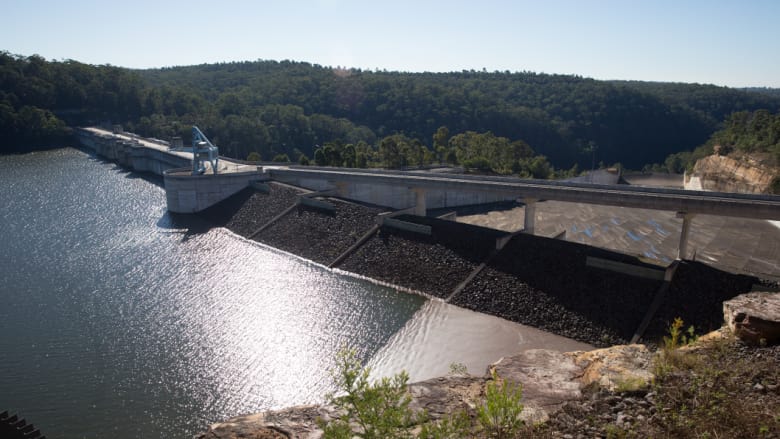 A multi-year fight has begun over the Berejiklian government's plan to raise the Warragamba Dam wall amid claims opponents are risking hundreds of thousands of residents to floods. Critics point to evidence of unnecessary haste as reservoir levels sink.

The government last week introduced an amendment bill into the upper house to permit the flooding of more than 3000 hectares of the Blue Mountains World Heritage area should the wall be raised the proposed 14 metres, and Sydney's main reservoir then fill up.

The bill is the start of a "logical sequence" to be followed by an Environmental Impact Statement expected by mid-next year. A business case will also be needed for a project that in 2015 was estimated to cost $670 million, with construction then expected to be finished by 2024.

Warragamba Dam at almost 98 per cent full in June 2016. The government wants to lift the wall by 14 metres to add flood mitigation to the dam's role.Credit:Edwina Pickles

Labor, the Greens and environmental groups have condemned the bill's winding back of protection in the national park that would destroy dozens of Aboriginal sites and 65 kilometres of wild rivers in the region even with temporary inundation.

"This is the first salvo," Justin Field, the Greens urban water spokesman said. "When the EIS is out, that will be the second."

“To introduce legislation that will allow the destruction of Sydney’s iconic wild rivers before the [EIS] and community consultation for the project is even completed shows this government has no respect for the community or nature," he said.

However, Stuart Ayres, minister for western Sydney, said raising the wall would expose only 0.06 per cent of the World Heritage area to inundation and would help avoid "a catastrophic flood".

"We believe it's an appropriate trade-off to protect the hundreds of thousands of lives of people who live in the greater west of Sydney, particularly the 130,000 who live on the flood plain today," Mr Ayres said.

The Hawkesbury-Nepean region downstream of the dam is recognised as a high-risk flood zone given its unusual confluence of rivers with a narrow exit to the sea. The potential is there for a "bathtub" effect that is slow to drain during big rain events.

Major floods have dogged the region over the two centuries of European settlement although it has not stopped planners allowing major housing and other infrastructure to be built on the plain.

Paul Broad, formerly chief executive of InfrastructureNSW, is a strong supporter of the wall-raising project.

"It's the best thing that could be done for infrastructure in this city by miles," Mr Broad told the Herald.

While it's too late to reverse inappropriate development in the region, it's also not right to play "Russian roulette" with floodplain residents who might struggle to escape a major flood, he said.