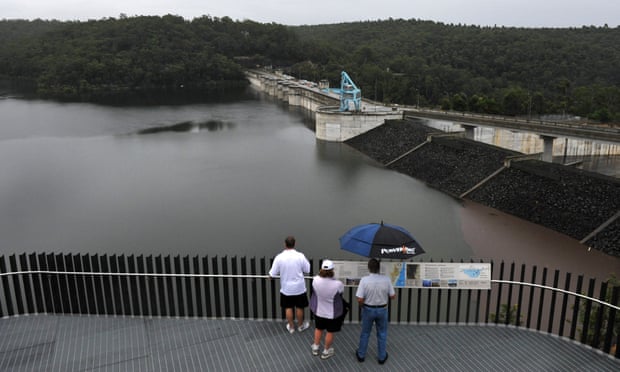 A leaked draft report has predicted world heritage areas of the Blue Mountains would be “permanently” changed by a controversial New South Wales government plan to raise a dam wall.

The state government is proposing to raise the walls of the Warragamba Dam by 14 metres to mitigate the impact of floods – a move that environmental activists say would flood Unesco-protected bushland, and endanger 50 historic Indigenous sites.

A draft report examining the impact of the dam, seen by Guardian Australia, said it would “have an overall high direct (physical) impact”, “result in permanent environmental changes”, affect 1,300 hectares, and affect those Aboriginal historical sites.

The leaked draft is an assessment of the impact on non-Aboriginal heritage – known as an HIA – which is a part of the broader environmental impact statement, which has not been finalised. The full EIS is due later in the year, and will then be made publicly available.

The draft report said: “The proposed increase in inundation levels … would result in permanent environmental changes to the ecosystems and ecology of these areas.

The minister for western Sydney, Stuart Ayres, said raising the dam was important to “reduce the existing risk to life and property on the Hawkesbury-Nepean floodplain”.

“The final decision to raise the wall has not yet been made and will only take place after financial, environmental and cultural assessments have concluded.

“While there will be environmental impacts from temporarily holding flood water from behind a raised dam wall, they must be measured against the social and financial impact a catastrophic flood would have on Western Sydney communities.”

The greater Blue Mountains area is heritage listed for its biodiversity and rare flora such as eucalypts and Wollemi pine, and Indigenous historical sites. Last week, Unesco advisers raised concerns over the dam plan and asked the state government to consult with the world heritage committee and share its environmental impact statements, before making a decision.

A final environmental impact statement is not due until later in 2019. And any decision to raise the dam would need the approval of federal environment minister due to the heritage listing.

But the draft report said the dam proposal would affect 1,300ha, which is 0.12% of the heritage listed area.

“The project would result in an overall high direct (physical) impact … [and] would result in visual changes to affected portions of the greater Blue Mountains area within the raised inundation levels, mainly by way of scarring.

“Increased inundation levels and duration upstream of the dam wall would additionally impact occupation sites and deposits within the greater Blue Mountains area that provide tangible evidence of the place’s longstanding Aboriginal connections.”

The NSW opposition environment spokeswoman, Penny Sharpe, said the dam plan was driven by a “rapacious development agenda” and should be abandoned.

“Instead of improving flood evacuation routes in the Nepean Valley, the real agenda here is for the government to open up more urban development to house an extra 134,000 new residents on the floodplain,” she said. “The Berejiklian government has been understating the impact on the world heritage area.

Campaigner Harry Burkitt, from community group Give a Dam, said the federal government should step in.

“The world heritage area impacted is more than 4.5 times Sydney’s CBD,” he said. “More than double what Minister Ayres has admitted to parliament and the public.

“The world is watching Australia, and the federal government needs to act and stop this developer driven dam project. It would be nothing other than a national disgrace if the Australian government approved the dam and the Blue Mountains lost its world heritage status.”

The report noted that areas both upstream and downstream of the dam would be affected.

But the impact on downstream areas would be “negligible”, it found.

“Areas downstream of the dam wall will see a reduction in flood heights and extension of flood duration…The overall impact observed from the six events examined downstream would only affect small areas on the edge of the greater Blue Mountains area curtilage around Colo and Colo Heights.

“The impacts in these areas across the six scenarios are considered to be negligible given the nature of the flood mitigation impact of the project.”