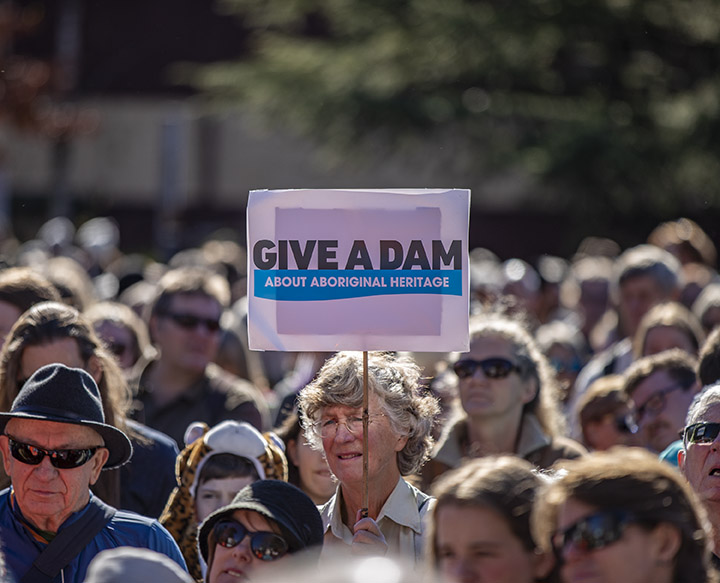 A UN report assessing the state of the Blue Mountains' World Heritage listing has raised "concerns" about the proposed raising of the Warragamba Dam.

The report, released for a World Heritage Committee meeting in Azerbaijan on Friday, is used to assess the state of properties on the list across the world.

In a three-page focus on the Blue Mountains' status, the report highlighted multiple concerns for the area and called on the on both the New South Wales and Federal Governments to send it any environmental impact statements before any decisions on the Warragamba Dam were made.

It comes as hundreds attended a rally in the Blue Mountains on Sunday to protest the Warragamba Dam proposal, which will see the dam wall raised by 14 metres to help water retention and as a means of stopping flooding in north-west and western Sydney.

The Warragamba Dam is used to supply water to Sydney — but indigenous leaders in the area fear it would result in the upstream inundation of significant cultural sites.

Penned through the UN's Educational, Scientific and Cultural Organisation (UNESCO) arm, the report said it was "concerning" that various reports had all confirmed the raising of the wall would result in "increased frequency and extent" of temporary inundation in the area.

"Such inundation of any areas within the [Blue Mountains] property is likely to impact on its outstanding universal value (OUV)," it said.

"It is therefore recommended that the committee request the [NSW and Federal Governments] ensure that, in line with its commitment, all potential impacts on the OUV are assessed in detail by the environmental impact assessment, which will be submitted to the World Heritage Centre for review [prior] to taking any final decisions regarding the project."

Water NSW and Infrastructure NSW are preparing an Environmental Impact Statement (EIS) for the proposal, due sometime this year.

The raising of the dam wall is a contentious issue in the community, with opponents predicting it will push critically endangered species to the brink.

As well as assessing the dam wall issue, the UN report also raised concerns that "several mining projects" existed in the vicinity of or adjacent to the Blue Mountains area, highlighting the impacts of the 2015 dam wall collapse at Clarence Colliery.

It also made a request to review the anticipated airspace and flight path operations, once available, for the Western Sydney Airport proposal.

Federal Environment Minister Sussan Ley told the ABC no construction activity on raising the dam wall would happen unless all Government approvals were in place.

"The Federal Government acknowledges the concern expressed in the draft World Heritage Committee decision about potential impacts of development on the Greater Blue Mountains Area," she said.

"I look forward to working closely with the World Heritage Committee and keeping them informed about the actions we intend to take which recognise the value of this world class natural landscape."

An Infrastructure NSW spokesperson said the Hawkesbury-Nepean is a "high-risk floodplain" and raising the dam wall was a key part of the strategy to reduce the existing risk to life.