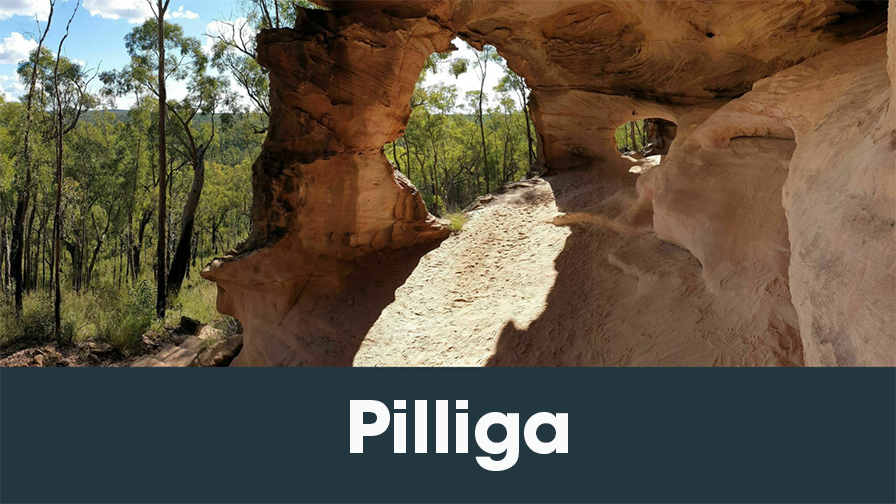 The Pilliga region just north of Coonabarabran in NSW is a vast woodland expanse of flat to undulating alluvial plains with occasional outcrops of Triassic and Jurassic sandstones and conglomerates.

In its south, the landscape rises towards the volcanic features of the Warrumbungle Range and becomes more characterised by low escarpments and ridge mosaics. Creeks drain north or north-west to eventually join the Namoi River.

The Pilliga ‘Scrub’ extends over 840,000 hectares and is the largest remaining area of continuous semi-arid woodland in temperate eastern Australia. Until recently, the Pilliga included three protected wilderness areas: The Timmallallie Wilderness of 26,082 hectares, the Gamilaroi Wilderness of 30,088 hectares and the Willala Wilderness of 73,734 hectares.

In 2009 the Federal Government’s environment department identified the Pilliga as a Biodiversity Hotspot, one of only fifteen in Australia. The Pilliga Scrub also provides an intact link between the Warrumbungle and Mt Kaputar National Parks.

The most notable feature of the area’s fauna, the rare Pilliga Mouse, was only discovered in 1975 and as with the Eastern Pygmy-possum utilises woodland areas with dense shrub layers. The Pilliga is also home to the Brushtailed Rock-wallaby, Rufous Bettong, Black-striped Wallaby and Pale Headed Snake. A once healthy large Koala population is now in rapid decline, and the state of its threatened Squirrel Glider populations is poorly known.

The Pilliga is also home to more than 800 native vascular plants. Of those, 269 species are endemic to the Brigalow Belt South Bioregion.

The woodlands are dominated by stands of Black Cypress and Narrow-leaved Iron Bark, with some representation of boxes, gums, angophoras and bloodwoods. On stony ridges Broadleaved Ironbark (E. fibrosa) becomes dominant, along with E. dealbata and Cypress, while creeklines feature a dominance of angophoras.

The woodlands are interspersed with heathlands dominated by Melaleuca uncinata with coastal and arid zone elements. Research in 1991 by Norris et al. indicated that the area’s woodland associations and canopy densities had not changed substantially since European settlement until the onset of intensive forestry in the last 20 years, with much of Pilliga Nature Reserve in old growth condition.

Even though the Pilliga is a high conservation area, its precious wildlife and flora have recently been endangered by industrial Coal Seam Gas (CSG) development.  About 12,000 hectares of Willala Wilderness are in Santos’ CSG project area, which was approved by the NSW Governments’  Independent Planning Commission in September, 2020.

Wilderness areas are characterised by natural vegetation, including few introduced plant species, a lack of permanent human settlement and development, and a lack of, or only low levels of human utilisation.

By approving Santos’ proposal to build 850 coal seam gas wells in the Pilliga region, the Willala Wilderness in the Bibblewindi State Forest is wilderness no more.

The Great Artesian Basin overlies coal seams and includes Pilliga Sandstone beds. The Pilliga forests and areas to the south are regarded as very important recharge zones for the whole Basin.

Rainwater falling in the forest is thought to spread westwards underground and feed much of the Basin. Pollution or lowering the water table under this model would have a very severe effect over the surrounding district.

Given the extent of dewatering to produce coal seam gas, it seems likely that the overlying strata of Pilliga Sandstone beds will be depressurised, the Basin recharge compromised in the adjoining western district and, as some critics have argued, shallow groundwater aquifers, which are crucial for domestic and agricultural water supplies, could be contaminated or run dry.

When groundwater systems are interfered with, large impacts are usually not reported by the company, even if obvious. Often they are only reported once the aquifer ‘bleeds out’, following complaints. It may take decades to discover blindingly obvious groundwater damage from CSG mining, and by then it will be too late.