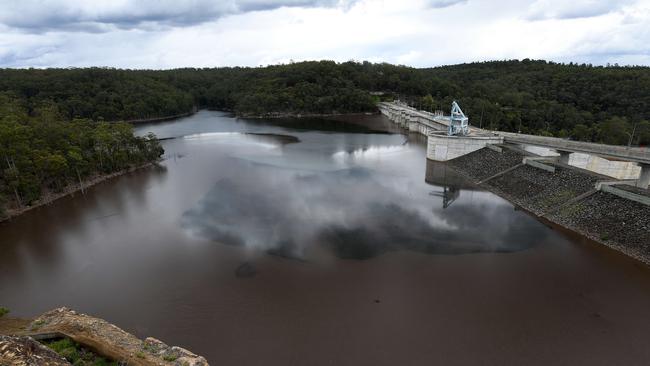 NSW Western Sydney Minister Stuart Ayres has defended a controversial proposal to raise the Warragamba Dam wall by 14m, admitting it would be “an expensive project” following reports costs could exceed $1.6bn.

Mr Ayres argued the project, which has been slammed for its impact on the environment and hundreds of sacred indigenous sites, would mitigate flood risk for nearby communities and secure drinking water for the nation’s largest city.

“We considered lots of other options,” he said, in response to questions on the viability of the project raised in a Budget Estimates hearing on Wednesday.

WaterNSW has made provision for the dam wall to be raised a further 3m, to 17m, to account for future flood risk due to climate change

Mr Ayres said the possibility of diverting river channels, dredging, creating levy banks, building more roads to aid evacuation during floods, preventing future development and buying back all of the properties in the high risk flood zones, had also been examined.

Mr Ayres refused to comment on revelations that the project could cost as much as $1.6bn — a figure unveiled in internal Treasury emails tabled in budget estimates last week.

“I’ve said time and time again, this will be an expensive project,” he said.

“I am not going to go into a running commentary on how much it will or won’t be.

“We will submit and lodge our application for the submission of the (Environmental Impact Statement) as part of that application process and indicative cost will be attached to that.”

Mr Ayres also accused environmental groups opposing the project of deliberately over-estimating biodiversity offset costs to make the project financially unviable. The offset costs have been estimated to be as high as $2bn, according to media reports last year.

“(The heightened dam wall) is for holding water temporarily. That could last for one hour at the outer extreme we think it is for two weeks,” Mr Ayers said.

“What we are talking about is temporarily holding water back so it isn‘t in people’s living rooms or their local suburbs for a period of time from one hour to 14 days.

Independent MP Justin Field, who chaired a NSW parliamentary committee probing the validity of the proposal in 2019, slammed this assertion, saying the offset cost was set by government policy.

“Environmental groups can’t do that,” he said. “You’ve got a government policy that sets offset costs, it’s not up to environment groups and lobby groups.”

“I question the government‘s approach surrounding the substantial environmental issues,” he said.

“We haven‘t seen any substantive evidence from the government in relation to what they are stating.

“It needs to consider the local Aboriginal community and their concerns about the effect it would have in surrounding areas that would be affected by the rising of the wall.

“I understand the supply matter, it requires more than just a quick Band-Aid fix that costs a lot of taxpayers money, that may not achieve the outcome anyway.”