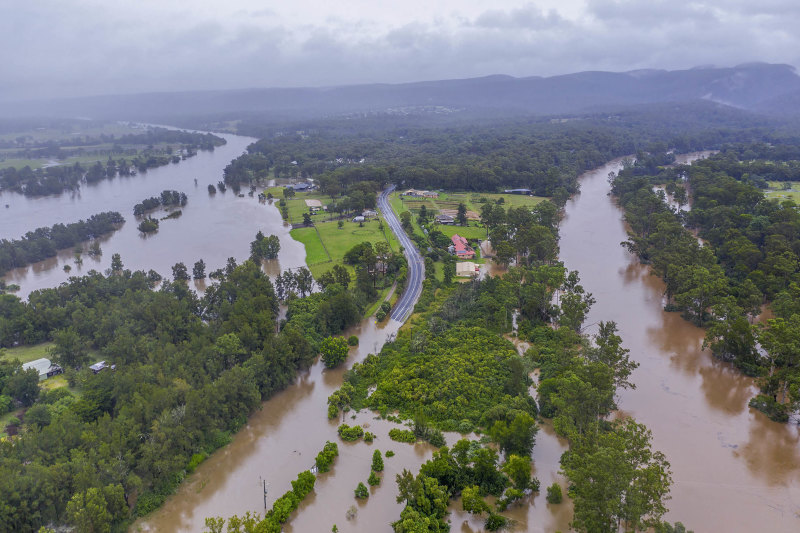 Raising the wall of the Warragamba Dam by 14 metres to hold more floodwaters — as proposed by the state government — would probably have had little impact on the current floods, experts have told the Herald.

“Building up the dam wall is seriously flawed and the government is exaggerating the mitigation benefits,” said Dr Chas Keys, a former deputy director of the State Emergency Service and flood researcher.

“You can achieve a little bit of mitigation in a situation like what we are seeing today and lesser events by raising the dam, but in big events, because of the tributaries coming in below the dam, the mitigation is strictly limited.

“You might knock off a metre, for example, from a flood of 1867 proportions - instead of 19 metres you might only get 18 metres,” said Dr Keys, who has campaigned against the plan to raise the dam wall.

Documents from the Berejiklian government put the cost of the dam raising at $1.6 billion, up from 2015 estimates of about $700 million to $1.6 billion.

The estimated additional capacity to store floodwater if the dam wall were raised 14 metres would be 991 gigalitres, or about half the current Warragamba capacity of 2027 gigalitres, the preliminary environmental impact statement for the project shows.

Dr Keys says the government would be better off investing in infrastructure such as the viaduct built between Windsor and Mulgrave, which would give people an evacuation route even in a flood that peaked at 17 metres, though this would still be below the 19-metre flood of 1867.

“There is nothing to say that that is the worst flood that could happen — you could get well over 20 metres. It would be very rare, it could be once in a few hundred years or even a thousand, but the trouble is it is inevitable.”

He said if routes out of the flood-prone areas were not built, extreme floods could cause hundreds of deaths as people who had been cut off retreat to islands before being washed away.

Second, he said the government should halt plans to build more housing on the floodplain below the Warragamba Dam.

“We shouldn’t be considering doubling the population of the Hawkesbury-Nepean valley to 250,000 people over the next 30 years,” he said.

“I know it is a growing metropolitan areas and they’ve got to go somewhere. But I don’t think they have to go into an area that’s got this serious and well-known problem.

He said we have come to see rivers as just the channel in which they normally flow, but in fact floodplains are part of river systems too, and rivers will “reclaim them from time to time”.

“Floods are rivers’ way of reminding slow learners that they own the valleys,” he said.

Professor Stuart Khan, from the University of NSW Global Water Institute, agreed with Dr Keys’ concern about the amount of water flowing into the catchment below the Warragamba Dam.

Further, he said it appeared that the amount of water expected to flow into the system above the dam — estimated to be about 1500 gigalitres — would eventually overwhelm the dam’s capacity even if it had been raised.

The result, he said, would likely be a delayed and perhaps even a slightly shorter flood peak.

“I don’t know that that would be a great deal of comfort to people who are flooded, though.”

Stuart Ayres, the Minister for Western Sydney, has previously told the Herald a higher wall would “create a 14-metre flood mitigation zone [that] would reduce average annual flood damages by about 75 per cent”.

Bob Debus, the former Emergency Services Minister and chair of the Colong Foundation for Wilderness, which opposes raising the dam wall, said that it was dangerously misleading to suggest the project could stop floods.

“It is very important to remember that it is not possible for Warragamba Dam, whatever its size, to stop the most extreme floods. Leaked charts published in the Sydney Morning Herald have shown that raising the wall would have only a moderate effect even in a one-in-500-year flood event.

“I take it to be very significant that the Australian insurance industry has now withdrawn their support for the dam wall raising as the critical element in flood management and mitigation in the Hawkesbury-Nepean Valley.”