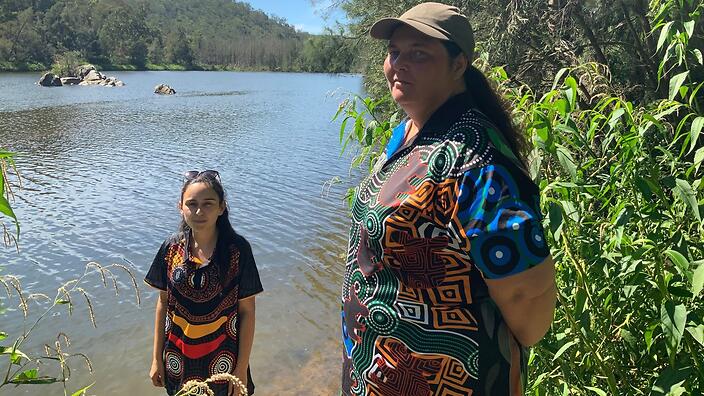 Two Indigenous women are worried that if WaterNSW’s $1.6 billion-dollar infrastructure plan gets the go-ahead, their ancestral homeland, and any remaining traces of their family’s habitation in the area, will be inundated or washed away in the next flood.

Speaking to NITV News from the banks of the Wollondilly River in the Burragorang Valley, Taylor says the area is incredibly special and sacred to the Gundungurra People.

“This (river) is connected to our dreaming story of this area, and the creation story that spans across the Blue Mountains and into the Southern Highlands. There's 21 waterholes that are sacred to that story and this is one of them, which is obviously really important to us because this is a space that our family have been custodians of since time immemorial.”

Kazan’s mother used to live in the area, before she and others were pushed out of the valley floor in 1948 to make way for the construction of Lake Burragorang and Warragamba dam.

“They estimate we've lost about 80% of sites that were along the river, which doesn't leave us a great deal...”

Kazan says lessons must be learnt from past mistakes if culture in the area is to be preserved.

“There are art sites down there that are close to the water, camp sites, burial sites, you name it, it’s down there...”

WaterNSW’s proposal would see the Warragamba Dam wall raised by up to 17 metres, for what it has described as ‘flood mitigation’ for the Hawkesbury-Nepean Valley flood plains. While the ability to hold back those waters for up to six weeks could ameliorate future flooding events, they could also potentially inundate thousands of hectares of pristine wilderness, including in the World Heritage Listed Blue Mountains.

Kazan wanted to be clear that she, her daughter and others opposed to the project are not against undertaking measures to mitigate flooding, but other avenues must be explored.

“We know flood mitigation has to happen, but there’s alternatives and I think the government should be taking those measures more seriously.” Kazan said.

Kazan and her daughter Taylor don’t get the chance to visit the Burragorang Valley as often as they’d like – access is usually off limits and on the rare occasion they do get to visit they need permission from NSW Parks and Wildlife and Sydney Water, who send an escort.

Kazan says she cherishes every chance she gets to come to the valley.

“I love it, it’s like coming home. It’s amazing coming down here, the more we do it the more I want to come back. We can’t come back enough. We’ve probably been down four times in the last six months and we would be here every weekend if we could.”.

Taylor too relishes the chance to be on country.

“It's been really important for me personally, to get down here and for mum to bring me down here because that's where we do our learning, on Country... it's been a journey for me over the last couple of years and something I haven't quite completed the walk that Songline to be able to tell that story in those places. I'm trying to build that map in my head, which is really important for our learning so one day I can walk this Country by myself, I'm not quite there yet.”

Kazan’s great-great-grandfather was John Riley, the first Aboriginal man in New South Wales to be awarded his own property rights.

His father George knew the value of education in the western way.

“George Riley, when he was a young boy saved a settlers son in one of the floods and as a reward, they were educated. George Riley and his kids were all taught to read and write and that's how we started." said Taylor.

Now as a direct descendent, Taylor Clarke will once again turn to education to help bolster their fight. She’s studying a law degree at Macquarie University so she can have a better understanding of the legal process involved with such projects. Taylor says the thirst for knowledge as a tool for good is in her blood.

“I have always grown up with... boxes of documents and books and random family members coming in and going out, because mum’s spent most of her life trying to put together the picture of Burragorang before the dam was built and I've always sort of embraced, you know, that knowledge around me and always expected that I would be a part of that.” she told NITV News.

Taylor added, “I want to do this so my kids don't have to and so the other groups in those other places where the government wants to destroy their country, so they didn't have to make that choice. They don't have to fight that fight because it's really hard."

One of the key issues raised by opponents of the dam is a ‘woefully inadequate’ environmental impact assessment process.

A Federal Departmental review reportedly found WaterNSW had not sufficiently evaluated the impact the proposal would have on the World Heritage Listed Blue Mountains, as well as up to 1200 culturally significant sites.

A NSW parliamentary inquiry investigating concerns around the proposal to raise the wall of Warragamba Dam is due to hand down a draft report within weeks.