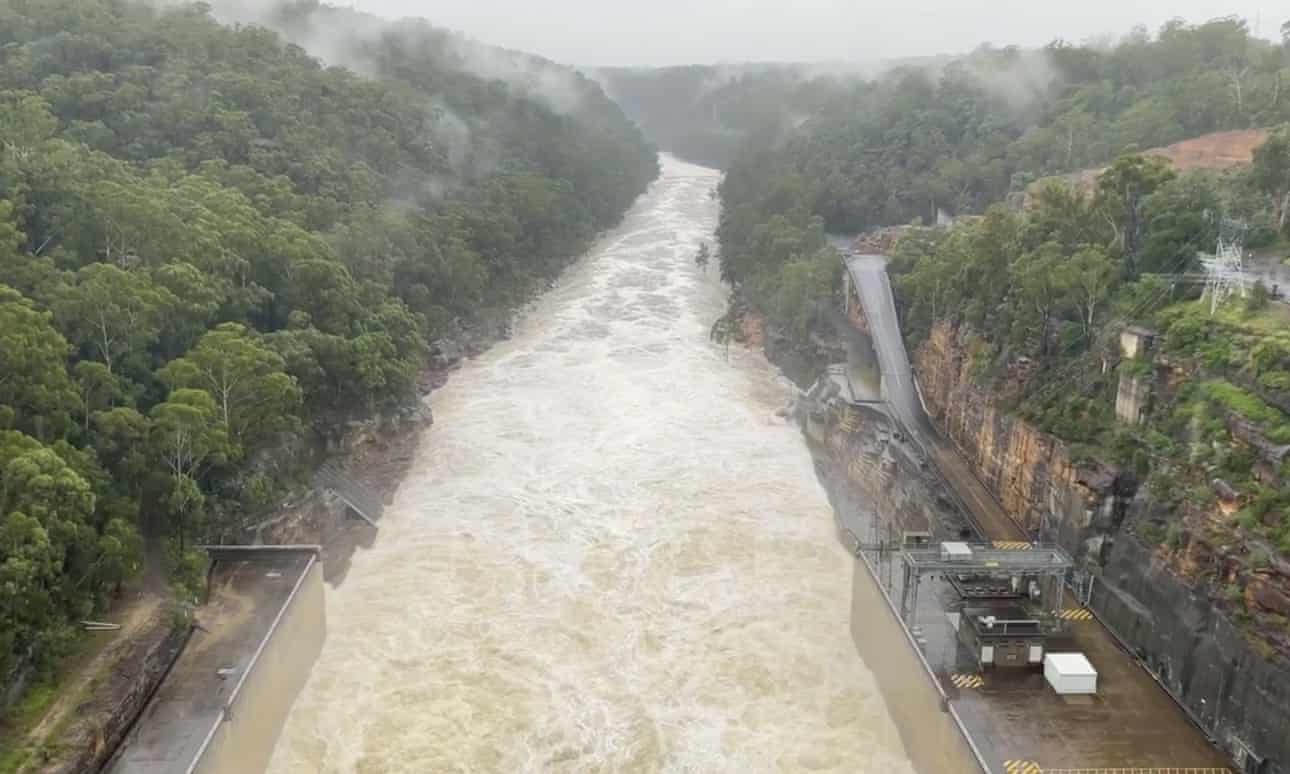 Warragamba Dam: would a higher wall have prevented Sydney flooding?

Warragamba Dam: would a higher wall have prevented Sydney flooding?

As flood water spills into the Hawkesbury-Nepean Valley, NSW’s plan to increase the reservoir’s height by 17 metres has come to the fore. But experts say it won’t reduce flood risk when it really buckets

Sitting beyond the western suburbs, Sydney’s main reservoir can hold about 2,000bn litres of water, equivalent to about four times what’s in Sydney Harbour.

It was built more than 60 years ago, draws water mainly from the Wollondilly River to the south-west and the Coxs River to the north, and provides about 80% of city drinking water.

The dam was at about 97% capacity before the extraordinary rain of the past week. Since Sunday it has been spilling into the Nepean River at a rate of up to 500bn litres a day.

Is this causing the flooding downriver?

It is a significant factor. According to WaterNSW, the spill from the dam is responsible for about half of the flood water in the Hawkesbury-Nepean Valley.

The fallout will be devastating. Towns and suburbs along the Nepean River were warned to evacuate on Sunday, and it is expected damage from flooding could disrupt the lives and homes of residents for weeks, if not longer.

At the time of writing, the river in that region had risen about 13 metres since late last week. The Windsor Bridge – opened last year amid promises it was better designed for flood – was under water. The Bureau of Meteorology has said it may be the worst flood conditions in the area in 60 years.

Would the flood have been avoided if the dam was raised?

According to the experts in the field, not necessarily.

The plan to raise the dam wall has been in development for several years, and has become a drawn-out and vexed political issue. Driven by the minister for western Sydney, Stuart Ayres, the New South Wales Coalition government wants to increase its height by up to 17 metres, believing it will limit flood risk downstream.

This would increase the dam’s capacity by 50%, or 1,000bn litres. The new capacity would be mostly left empty, giving the dam greater capacity to absorb a major deluge. That extra water would then be slowly released once the flood risk had passed.

But experts in the field warn raising the dam wall would not necessarily remove the flood risk.

Consider the current event: it is expected to dump about 1,500bn litres into the dam. Even if the wall was raised as proposed, that would leave 500bn litres spilling on to the floodplain below.

This change would certainly have an impact. It would delay the flood peak as the dam took time to fill. But scientific analysis suggests it would not necessarily lead to a lower maximum flood height.

Why? Geography plays a big part. About half the water that has caused the current flood comes from other sources and at some point, perhaps a day or two later than currently, it would be joined by a Sydney Harbour-sized spill from the raised Warragamba Dam. Several tributaries meet at a choke point in the river system, constricting the flow in the area where the Hawkesbury River drains the valley.

The problem at this point is there is little chance for the water to escape. Stuart Khan, a professor at the University of NSW’s Global Water Institute, says it creates a “bathtub effect” as the water backs up into the flooded area. “The problem is not just what can get in, but what can get out,” he says.

It means raising the dam wall could certainly help during lesser downpours, but it would not remove the risk when the rain really buckets – and the evidence the climate crisis can increase the intensity of extreme rain events is clear.

What is the argument against raising the wall?

From an environmental perspective, officials and scientists have warned it would have a major impact on the Blue Mountains world heritage area upstream from the dam.

Leaked federal environment department documents have suggested it could affect half the remaining global population of the critically endangered regent honeyeater and could lead to the extinction of forest woodland communities. It also could kill more than 200 greater gliders, a vulnerable species that has already been badly affected by the 2019-20 bushfire disaster. Other impacts were less clear: the documents showed officials had expressed concern that WaterNSW’s assessment had not adequately assessed risks to other endangered species.

There are also dozens of recognised Aboriginal heritage sites upstream that could be wiped out. The extent of the potential damage prompted the Unesco world heritage committee to express concern it could affect the outstanding universal values that had made the Blue Mountains a globally recognised site.

Should we be building suburbs on a floodplain?

That is a planning and political question, but it has significant implications. In 2017, Infrastructure NSW said there were up to 134,000 people living and working on the floodplain who could require evacuation if there was a major flood and urban expansion could double that over the next 30 years.

Jamie Pittock, from Australian National University’s Fenner School of Environment and Society, argues the dam wall heightening is driven by residential and commercial developers, and warns that putting tens of thousands of homes in a potentially major flood path has failed elsewhere – notably in Brisbane, where 35 people died in 2011.

Where is the dam-raising plan up to?

It has been delayed. An environmental impact assessment and detailed concept design had been due by last year. WaterNSW is now expected to finish the former by mid-year.

Construction was previously planned for between 2020 to 2024, assuming the project is granted environmental approval and the business case stands up. But it still has to be finished and win backing from state and federal authorities.

In the meantime, NSW’s emergency services minister, David Elliott, is reported arguing with his cabinet colleague Melinda Pavey, the water minister, over whether water levels should have been lowered ahead of the storm to limit the damage being experienced now.

The deputy premier, John Barilaro, suggested in an interview with Sky News on Tuesday that the government should be considering other options to raising the wall, such as maintaining the dam at its current height, routinely keeping the water well below capacity to allow for flood mitigation and building another desalination plant to meet Sydney’s water needs.

As is common with Warragamba Dam, the question of the best way ahead has not been resolved.